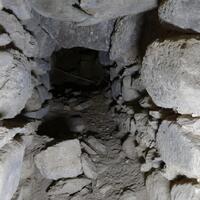 A sewer network discovered in the ancient city of Mastaura

Archaeologists discovered a sewage system said to be 1,800 years old during excavations in the ancient city of Mastaura in the western province of Nazilli district in Aydın.

Experts have been working on the site, located inside a narrow valley and about 3 kilometers north of Nazilli, for two years.

“The size of the structure is incredible. A person can easily navigate the system, which extends throughout the ancient city. It seems to represent an early example of municipal work,” said Umut Tuncer, provincial director of culture.

The ancient city covers an area of ​​approximately 160,000 square meters.

In ancient times, a river ran through Mastaura and people settled on both sides of the waterway, said Sedat Akkurnaz, from Adnan Menderes University’s archeology department, which is in charge of excavations at the site.

“What we see here is the sewer system built underground. The engineering technique and materials used in the structure suggest that construction work began around 200 BC, and that the sewage system was used throughout the ancient period during the time of the Roman Empire,” Akkurnaz explained.

“We can only go about 20 meters into the sewers because there are cave-ins inside the structure blocking the way.”

Over the past two years, significant discoveries have been made at the ancient site, which have sparked the interest of archaeologists around the world, Tuncer said.

Experts said the structure is unique in Turkey due to the fact that it is completely round.