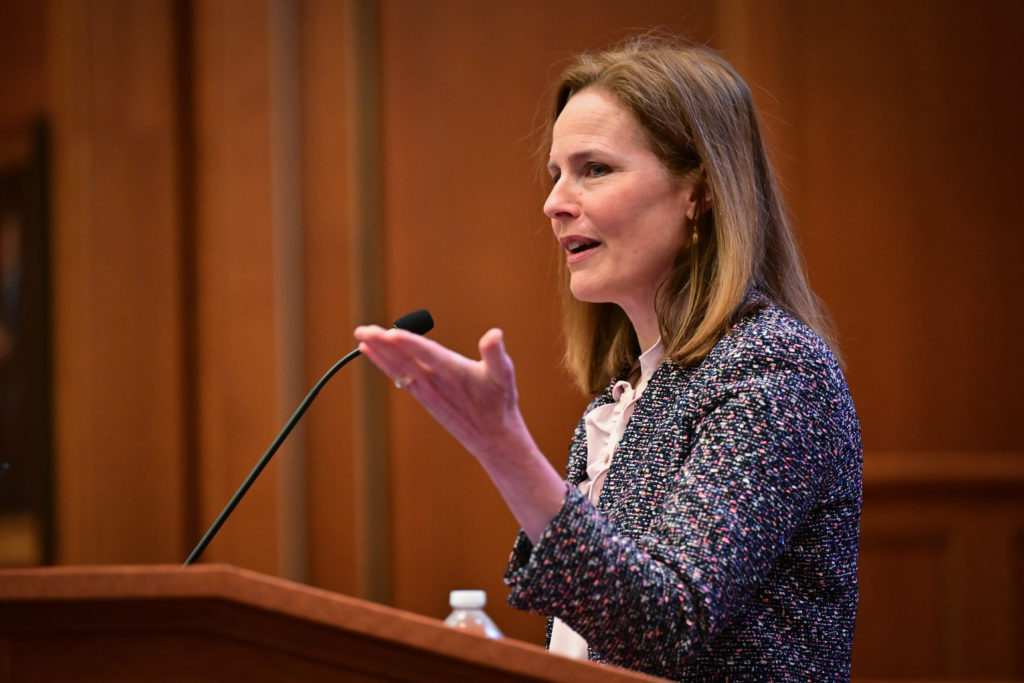 During her keynote address for the symposium, Barrett discussed federal equity power, or federal courts’ ability to issue remedies concerning fairness and justice within the law, and how the debate between law and fairness mirrors that of constitutional interpretation. She concluded her appearance by answering questions about her transition to the US Supreme Court.

“The relationship between law and equity is of interest to us all, even to non-lawyers,” Barrett said. “At root, it’s about the tension between the demands of the law, which constrains, and the demands of fairness, which is flexible. That tension permeates almost every area of ​​our law.”

Barrett called returning to Notre Dame to speak to students and faculty at an academic symposium a slice of her “old life.” Adjusting to her new life as a US Supreme Court justice and a public figure has proven challenging, she explained.

“It’s like learning to ride a bike with everybody watching you,” she said.

As the first woman to ever have school-aged children while sitting on the Supreme Court, Barrett said the balancing act of serving as a mother and a justice presents not only challenges but also advantages. Barrett joked that she was the only Supreme Court justice to have the soundtrack from the Disney movie “Encanto” stuck in her head while walking into the courtroom.

“I think I have a different perspective just because I’m seeing a different slice of life,” Barrett said of her perspective on her career in contrast with her colleagues.

The lecture primarily focused on the role of equity and its “love-hate relationship” with the law. Barrett defined equity as a set of rights, remedies and procedures that judges can turn to when there is no adequate legal relief.

She emphasized that the role of judges is not to act as angels and dispense justice on their own whims, but rather to interpret the law. Equity is a specific and technical branch of law, Barrett said, not a license for judges to abuse their power. Instead, Congress is the body that can use law to dispense justice.

“Judges have no authority to override the law in the interest of justice,” Barrett said. “Now, while formulas and practices agree on this foundational principle, they don’t always agree on how it applies in individual cases. And that’s why there’s a debate about constitutional interpretation.”

A self-proclaimed formalist — a closely associated school of thought to originalism — Barrett said allowing too much flexibility and judicial discretion can be dangerous. Judges should maintain strict fidelity to the law, she said.

She said while one may be drawn to the idea of ​​allowing a lot of judicial discretion to a judge who sees the world the same way as they do, it ultimately is not appealing for the possibility of a judge having a differing viewpoint to that of the person mired in the law.

Barrett concluded her speech by referencing two statues that sit outside the Supreme Court. One represents justice and equity and the other represents the law and aspirations of fairness and justice. Both of these elements are necessary in the judicial system, she said, though the law itself is what most reliably delivers justice.

“We want both in our system, and most often the law itself is what delivers justice,” Barrett said. “But when it doesn’t, it’s up to you as the people to change it. Law and equity site [at] the steps of the court as they do in the law books inside it. Both present, sometimes pulling in opposite directions.”

2022-02-15
Previous Post: How to Enable WPA3 Security on Google/Nest Wifi Mesh System
Next Post: the best way to watch sports and tv