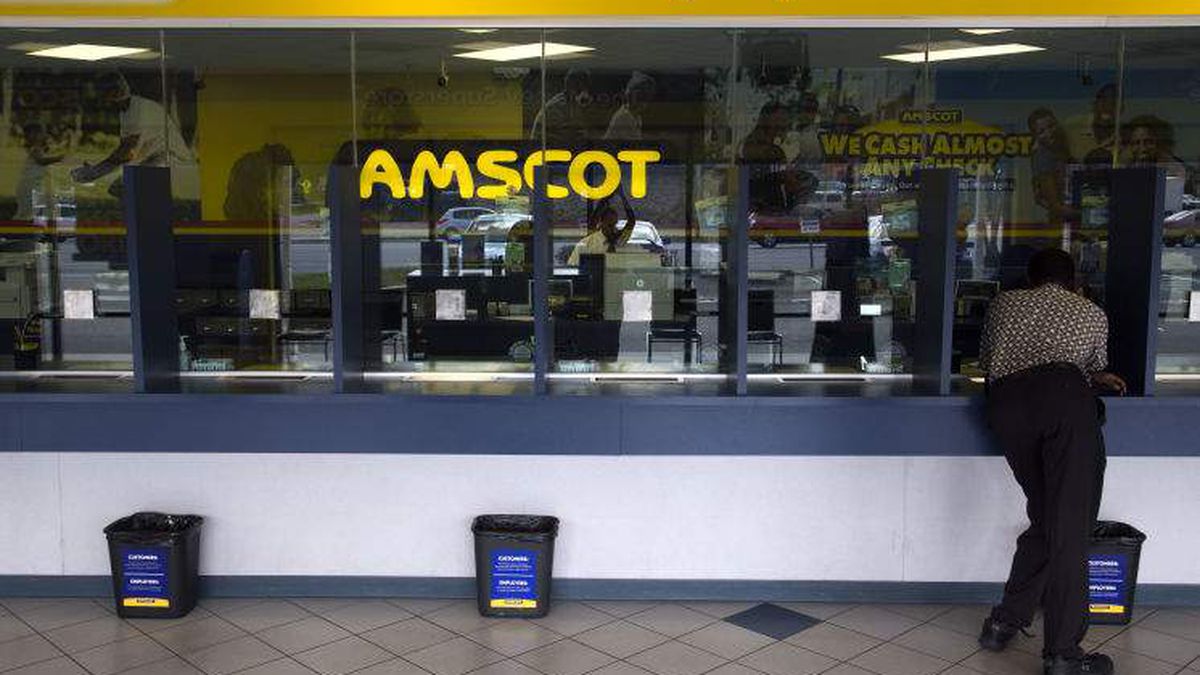 Are payday lenders like Tampa-based Amscot a necessary part of the banking industry?

TAMPA — Tanya Agliano needed $400 to pay for her husband’s insulin. She said she does not qualify for a traditional loan at her bank. So she went up the street to Amscot.

Agliano is like nearly half of other Americans who do not have the cash to cover an unexpected $400 bill and sometimes turn to payday lenders. Tampa-based Amscot is the largest in Florida.

“He’s got to have his medicine,” Agliano explained.

Critics contend payday lenders, with their triple-digit annual interest rates, prey on the most vulnerable Americans who end up, as President Barack Obama said, “trapped in a cycle of debt.”

The U.S. Consumer Financial Protection Bureau last month proposed sweeping changes that would limit the number and amount of loans borrowers like Agliano, 54, can take out. Many in the industry, including Tampa-based Amscot, say the proposed regulations would put them out of business.

Agliano cannot imagine what she would do if she lacked access to that money.

And even the payday loan industry’s detractors acknowledge that precious few alternatives exist for the working poor.

“If you’re making $15 an hour, you’re living paycheck to paycheck,” said Earlene Scott, a New Port Richey mother of three who works as a claim specialist in Tampa.

A few years ago, Scott took out a $450 loan from Amscot to get her transmission fixed. She paid it off on her next paycheck, plus a $46 fee, then took out another to get her through the month. Then another.

“I always took out the same amount,” she said. In total, she paid about $150 in fees stemming from the initial $450 loan and ended up paying it off by borrowing from a family member. Scott said the price was high. But a low credit score prevents her from getting a credit card. Her family did not at the time have extra funds to help her out.

Without the loan, she would have struggled to get to work. Even though she called it a debt trap, she said Amscot was her best option.

The Tampa Bay Times interviewed 24 payday borrowers at one of Amscot’s busiest locations, on Himes Avenue in Tampa. None believed they would be better off if payday loans were not available. All but three said they used the loans for emergencies only.

“Ultimately credit can’t make up for not having enough income,” said Nick Bourke, director of the Pew Charitable Trust’s small dollar loans project. The trust has done some of the most extensive research on the topic, including hundreds of interviews with payday loan borrowers in 2012 and 2013.

“Borrowers report that it feels good and is helpful (to take advantage of a payday loan),” he said. “But if they’re just barely making it by, today’s payday loans aren’t helping them.”

Currie’s clients may know how to stretch a dollar, but setting aside an emergency fund is difficult for people who live paycheck to paycheck. He said that if they do come into some cash, say from a tax refund, few will set some aside for a rainy day.

Subscribe to our free Business by the Bay newsletter

We’ll break down the latest business and consumer news and insights you need to know every Wednesday.

You’re all signed up!

Want more of our free, weekly newsletters in your inbox? Let’s get started.

Explore all your options

“It boils down to financial education,” he said. “When you put money away you can avoid needing these services. . . . I’m amazed at how many people when I talk about basics of budgets are just intimidated.”

A whopping 47 percent of Americans would have to borrow money or sell something to cover a $400 emergency, according to a recent study by the Associated Press-NORC Center for Public Affairs Research.

Amscot was founded in 1986 to provide borrowers a bank-like alternative to a liquor store or pawn shop, said company founder Ian MacKechnie. A native of Glasgow, Scotland, MacKechnie named the business as an abbreviation of American-Scottish. The company has 239 locations across Florida, focusing in areas where banking options are slim.

Made famous for its “money superstore” television commercials, a key part of Amscot’s business model is having “brightly lit, clean and easily accessible” stores where the staff is bilingual and every customer gets a Tootsie Roll. (Amscot says it is the third largest Tootsie Roll buyer in the state.)

Regulated by the Florida Office of Financial Regulation, payday loans in the Sunshine State have a maximum fee of $10 per $100 borrowed over 31 days. All loans also carry a one-time verification fee of up to $5. Those charges are in line with the national average. Amscot’s total fee is $11 per $100. Florida also imposes a $500 cap on loans and limits borrowers to one at a time.

In most states, including Florida, borrowers must provide proof of income and have a checking account.

Florida law requires that customers who tell Amscot they cannot pay a loan be connected with a financial counselor to set up a repayment schedule. In that case, that account enters a 60-day grace period, where it does not accrue additional fees. Less than 1 percent of consumers use that option, according to the Center for Responsible Lending.

Cash advance loans in Florida average about $360, which carry a $37 fee. If the borrower continues to take out that amount for seven months (the average for Amscot customers), they would pay $259 in fees for the initial $360 loan.

The industry defends its fees, noting the high-risk nature of the loans, which have a 2 to 3 percent default rate nationally. It argues that the nearly 400 average annual percentage rate is misleading, since the loan term is so short.

Defaults are less of a problem at Amscot, where an average of 1 percent of the company’s 3.5 million annual payday loans are never paid. MacKechnie attributed that to the company’s ability to screen and properly approve loans, as well as customer loyalty.

“People want to do business with us,” he said. Although payday loans account for about 20 percent of Amscot’s annual transactions, the fees generate 60 percent of its annual revenue. Asked if the company could instead charge more for other services, MacKechnie said Amscot’s prices are competitive and charging more for them would result in lost business.

The fees are in line with state regulations as well as its competitors, MacKechnie said. They help keep the lights on 24 hours a day at many of Amscot’s locations around the state. The company employs about 1,850 people and has annual revenues above $200 million.

Amscot’s other services include money orders, wire transfers and prepaid debit cards. It even has agreements with Tampa Electric, Duke Energy and certain counties to process utility payments.

Pew argues that banks should offer a payday loan alternative. Payday loan borrowers already have accounts with traditional banks, Bourke noted. Those banks should offer small loans of at least six months without a credit check and restrict payments to 5 percent of the borrower’s monthly income, he said.

Many big banks do not currently offer those products and have few branches in the areas where payday lenders like Amscot have filled the void. The banks avoided it, Bourke said, because the rules are hazy and they do not want to get into trouble with federal regulators.

“If the regulations are clear enough, banks are going to be able to automate and simplify these loans,” he said.

Bourke recognizes that traditional banks are never going to be open 24/7 in these neighborhoods.

Ideally, he envisions a system where consumers can easily secure small loans through their banks online or at ATMs, matching the convenience of the payday storefronts.

“We’re not going to see fair lower cost alternatives at scale unless the banks or credit unions find their way into this market” he said. “There are no other options that scale.”

“I know the high cost people have to pay to go in and get loans, but I’m not getting complaints from my constituents,” he said. “They have nowhere to go. (Amscot) provides a service and people feel comfortable utilizing their services.”

Existing MidFlorida customers who can prove steady income and meet a handful of other criteria can qualify for a loan of up to $500 with no credit check or collateral. Customers who qualify repay with monthly payments over at least three months at a 27.71 percent interest rate.

According to Pew research, Florida’s average APR is 304 percent, less than the national average of 391 percent. Pew thinks that is still too much.

Instead, it supports a Colorado model, where in 2010 the state reduced the fees on payday loans to about 115 percent annually and extended the length of those loans to at least six months. The state also required that lenders offer installment payments and prohibited them from charging penalties for early payment.

The changes led to a 53 percent drop in the number of payday storefronts. Pew reported that it was better for consumers, since fewer Colorado borrowers rolled over the loans, saving about $41 million in fees annually compared to the old model.

Last year, Florida borrowers took out 7.9 million payday loans, according to state data. While the state does not break those down by company, Mac­Kechnie said Amscot processes 3.5 million loans annually.

The proposed federal regulations ”would put us out of business,” MacKechnie said. “It’s ridiculous.”

MacKechnie agrees that federal regulations are needed to protect consumers from online payday lenders, which are known for widespread fraud and abuse and have skirted state regulations.

Pew reported that 30 percent of online payday loan borrowers were threatened by the lender, 39 percent said their information was sold to a third party and 22 percent were forced to close their bank accounts after the borrower made unauthorized withdrawals.

The Consumer Financial Protection Bureau is accepting feedback from consumer advocate groups, industry representatives, politicians and consumers before it makes a final decision in the fall. MacKechnie said that if federal regulations are scaled back to Florida’s level, the company would consider expanding nationally.

Although it operates only in Florida, Amscot has a national reach.

Americans for Financial Reform found that in the 2013-14 election cycle, Amscot donated $821,150 to national political campaigns, making it the 10th largest source of payday industry contributions.

In 2001, Amscot helped to draw up Florida’s existing regulations on the industry.

Drew Breakspear, commissioner of the FOFR, warned that the proposed federal regulations could “eliminate access to small loans and credit,” “force many payday lenders to close,” and “cause the loss of thousands of jobs.”

“Lack of access would leave many destitute and desperate,” he wrote.

Amscot has had few blemishes on its record, according to the state.

The five complaints filed against the company since 2013 were from consumers who said that when they went to cash a check to pay rent or send a money order to their family, Amscot kept the money to settle a previously unpaid cash advance. After the complaints were submitted, Amscot forgave the debt and provided refunds to three of the consumers and worked out payment plans for the other two.

Amscot also requires borrowers to sign an arbitration agreement that waives their right to trial by jury and ability to file class action lawsuits.

In 1998, Amscot pleaded guilty to civil charges of racketeering after regulators found it was ripping off auto insurance customers. MacKechnie was subsequently barred for life from selling insurance in Florida. He did not face criminal charges.

Jon Breene, 21, and his wife, Adriana, recently depleted their savings when they moved to a new apartment in Tampa. After the added expenses, they needed extra cash for groceries and their phone bills.

So on a sunny afternoon in June, they went to Amscot for a $150 payday loan.

“If you’re responsible you’ll be able to pay it back,” Jon said. He planned to work overtime to pay off the $150 loan without carrying it over. While they thought the $16 fee was reasonable, Jon recognized that the loans can be trouble.

“Hopefully we’ll never have to do it again,” he said.