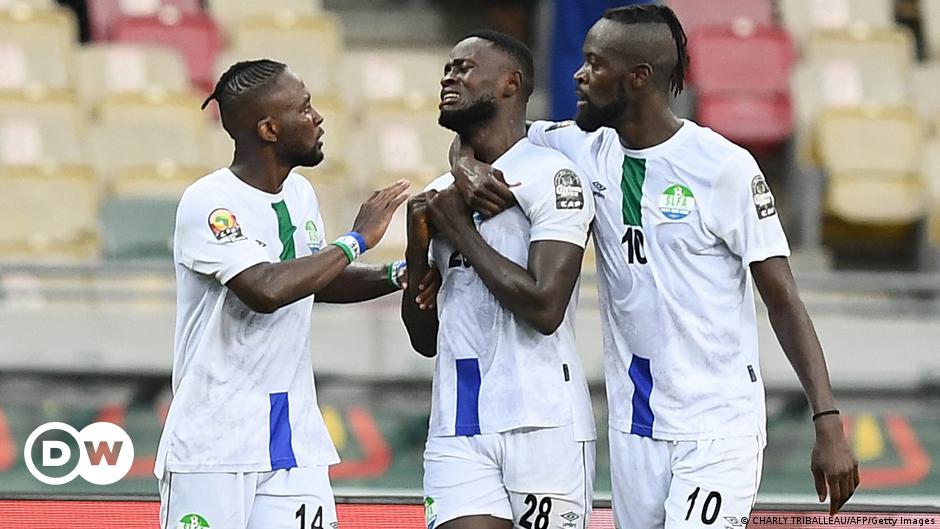 The Africa Cup of Nations is a tournament that always has stories, and this year Sierra Leone’s might be the most remarkable of them all.

“In 2013 they are one game away. In 2015 it’s impossible because of Ebola, and in 2017 they finally recover from the Ebola outbreak but fail again. And in 2019 they were disqualified due to suspension from FIFA… Really, Sierra Leone has been the near man of African football for the last 15 years,” Tom Legg, former head of performance for Sierra Leone, told DW.

After a superb draw against Algeria, thanks in part to a man-of-the-match performance from goalkeeper Mohamed Kamara, Sierra Leone came from behind twice to draw with another tournament favourite, Côte d’Ivoire. Ivory.

Kamara again provided exploits, this time saving a penalty from Franck Kessie in the first half. Sierra Leone equalized for the second time in the 93rd minute, with one of the most spectacular goals of the tournament so far.

“It’s great to know them as people and to have spent time with them as people to see them achieve what they are achieving right now in Cameroon,” Legg said. “I’m thrilled for them.”

It is a team whose strength is based on collective unity rather than individual abilities. They hadn’t qualified for the Africa Cup of Nations since 1996, with civil war, Ebola and floods hampering the country a lot, not to mention the development of football.

“‘There always seems to be something in Sierra Leone that’s stopping the players, this team, from reaching the heights that they can reach,” Legg said.

“The most obvious from the 2000s was the Ebola outbreak in West Africa. Immediately you have a humanitarian and medical crisis which makes it very difficult for players to get around. Suddenly we had games played away from Freetown, away from home games. In the European context, it’s difficult when you’re not playing at home, but in Africa, because of the logistical challenges that exist, it really weakens your position as a team.”

Legg believes the 2012 generation he worked with would have reached the Africa Cup of Nations and possibly even the World Cup qualifiers had it not been for circumstances beyond his control.

Indeed, by mid-2014, Sierra Leone had climbed 21 places in the FIFA rankings to reach 50th place, the highest it had ever been ranked.

Things haven’t been that easy since. The team entered this tournament following a loss to fellow surprise qualifiers Comoros and are currently ranked 108th, but the generation core group that never had a chance are now in head from Sierra Leone to Cameroon.

Thirty-four-year-old captain Umaru Bangura, John Kamara (33), Kei Kamara (37) and possibly the next captain, Kwame Quee (25), are at the heart of this Sierra Leone team, for maybe the last time too.

“What speaks to John Keister, the current head coach, is that in the same way that John McKinstry did before when we were on the team, he provides a sense of stability and calm where the enormous individual talent that exists in Sierra Leone is able to collectively come together and provide a framework to perform at the highest level of African football,” said Legg.

The jubilant scenes on the streets of Freetown after the result against Ivory Coast show how much this means for a nation which for a time must have felt its chance would never come.