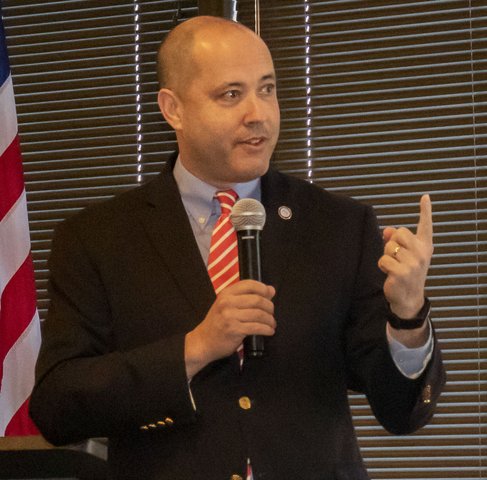 Carr received the microphone in the James H. “Sloppy” Floyd Building after Hitchens III mentioned that law enforcement officers want and need the support of the public during difficult times for them.

“I want to thank Lt. Col. Hitchens and his colleagues for all they do,” Carr said. “As he said, this is a very difficult time for law enforcement – ​​recruitment and retention. There is a crisis of respect in many areas, but particularly in the application of the law. law.

“You know, we can’t get together today to talk about policy, to talk about the issues of the day, to talk about economic development if there aren’t men and women willing to put on a uniform at the both here and abroad to ensure our safety.

Carr, who has served as attorney general since 2016, offered three suggestions to ease the law enforcement crisis.

“We must stand up and support men and women in law enforcement,” he said. “I mean all of us collectively – those in elected office and the community – because I believe that whenever Lt. Col. Hitchens, his colleagues, local law enforcement and others leave home, someone says a prayer for them to come home. without issue.

Carr continued on this theme.

“Second, we need to provide the resources, the training and the technology to help law enforcement do their job,” he said. “Better trained law enforcement leads to safer communities. It’s a win-win…”

Carr had a stronger recommendation.

“When we ask law enforcement officers to come out and enforce the law, we must demand that our state attorneys obey the law. We now have prosecutors who are someone from the judiciary or the executive who say, “I don’t like this law, so I’m not going to enforce it.”

“It is a dereliction of duty. It undermines the way we do things. If you don’t like the law, join these members of the legislature. This is how we change the laws in this country.