We have already reported on the judgment of the General Court in the case Lego A/S v EUIPOin which the General Court annulled the decision of the Board of Appeal to invalidate the registered Community design of Lego protecting a new form of Lego brick.

The council had originally ruled that the brick’s registration was invalid, as its appearance was “solely dictated by technical function”. In reversing that initial decision, the General Court found that the board erred in failing to consider whether the flat surfaces on either side of the uprights were solely dictated by the technical function. Furthermore, the General Court held that the board should have considered whether the Lego registration could benefit from the exception allowing a Community design to survive when it is part of a modular system.

The Board of Appeal has now reassessed the Lego registration in its recent decisiontaking into account the judgment of the Court.

Following further submissions from both parties, the board was satisfied that the smooth surfaces on either side of the uprights were dictated solely by technical function. To reach this conclusion, the council considered several Lego building sets that required smooth surfaces to be present so that the brick could interconnect with other Lego components. Additionally, the board noted that the lack of studs allowed for greater flexibility when connecting bricks together, as well as the ability to position Lego minifigures at different angles. 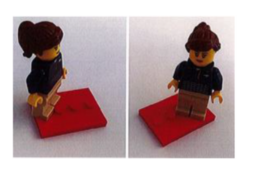 Lego argued that the brick was originally designed as a standing plate to display the Lego minifigures and therefore the smooth surfaces were there for aesthetic reasons. However, the board considered this to be a “subjective” reason which could not change its view of the “objective” circumstances which indicate that the smooth surfaces were solely dictated by the technical function; the correct assessment had to be objective in line with the judgment in DOCERAM C-395/16.

Therefore, the board maintained its original view that the appearance of the Lego brick was solely dictated by technical function.

Usually, a finding that the appearance of a RCD is dictated solely by technical function would invalidate the design. But according to the judgment of the General Court, the board had to examine whether the design served “the purpose of allowing multiple assembly or connection of mutually interchangeable products within a modular system”.

If so, the design benefited from the modular system exception and could not be invalidated to be solely dictated by technical function. The council noted that “LEGO bricks are probably the best-known example of such a modular system”, and therefore had no hesitation in concluding that the exception applied to registration of the Lego design. .

The board also recognized that the exception still requires that the design meet the requirements of novelty and individual character. In the present case, no convincing evidence has been provided showing that these requirements were not met.

Overall, the application for nullity was therefore dismissed.

This decision demonstrates the power of the modular system exception to save a design from invalidation when it is considered to have an appearance dictated solely by technical function. It is consistent with one of the purposes of the European Union’s registered design system, which is to protect the innovative features of modular products. Given that Lego is the quintessential modular system, the conclusion isn’t particularly surprising in this case, but it will be interesting to see what other products try to use the modular system exception.

I AM is universally recognized as the world’s leading information platform for practicing lawyers working in the field of intellectual property and patent law.