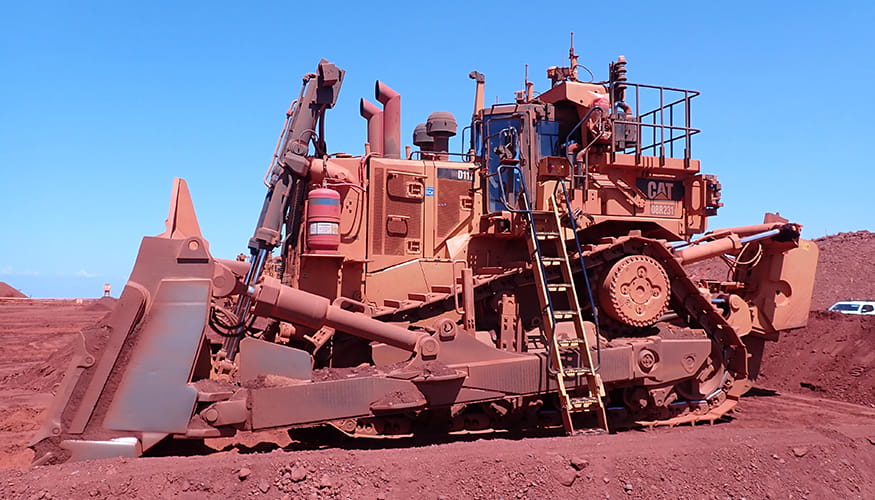 Rio Tinto, WestTrac and Caterpillar have embarked on a project to deploy a new remote racking system (TDS) at Rio’s iron ore operations in Western Australia which they say is all about safety operators.

“The brief was to get the operator out of the line of fire,” Woolcock said. “In particular, the focus was on reducing the risk of operators being in machines with a risk of slipping or stability issues, for example when working on stockpiles or near steep walls.”

There are multiple layers of technology and control options involved in the solution, depending on specific customer and site requirements.

Caterpillar Senior Service Engineer Steve Dougherty explained, “To get started, you need the basic remote control kit. There are different kits available for each machine size. If you wanted to do basic remote control work, there is a kit that includes a console receiver, which is a dedicated wireless link installed on top of the cab.

“There is a Remote Control Module (RCM) which installs under the seat and interfaces with all functions of the base machine, along with associated wiring and Wi-Fi to allow the various parties to communicate.”

The solution includes options to control machinery within visual range, consisting of an over-the-shoulder console and a dedicated network, which Dougherty says is typically suited to operators needing to perform high-risk temporary or one-off applications.

“You could run that way all day if you wanted to, but the units are set up with deadman’s switches so are really designed for things like machine recovery,” he explained.

“For longer-term applications, like the one Rio Tinto is rolling out, we’ve implemented a cockpit that looks a lot like a simulator with all in-cab controls replicated. It can still work as a line-of-sight solution, but more typically customers opt for the vision kit, which adds four cameras onboard the dozer and uses a customer-provided Wi-Fi network to relay all that information on the machine and the video is transmitted to the operator station, wherever it is.

While Dougherty claims the remote station solution can allow a single operator to control up to five machines at once in certain circumstances, such as surface mining operations, Rio Tinto’s solution is purely designed for move operators to a safer and more comfortable operating environment.

Rio Tinto’s superintendent of operational readiness, Jamie Webster, says the initial deployment of the TDS at the Cape Lambert port facility, northeast of Karratha, is focused on high-risk operations on coarse ore stockpiles with steep gradients and “living” zones where the ore is introduced into underground tunnels.

“Safety is the number one priority at all Rio Tinto sites and for all employees,” says Webster.

“The message at all levels is that safety always comes first. Everyone on site, from managers to cleaners, is empowered to stop if they ever feel unsafe and we are always looking for ways to improve processes so that no one is at risk.

According to Webster, the TDS project is one such area where process improvements have been identified to reduce risk.

“These bulldozers operate in a fairly restricted area around a lot of fixed assets,” he explained. “This means that the work is quite complex and the real benefits will be realized by pushing the ore from the stockpiles to the active areas.

“Bulldozers are working on top of a large pile and if a bulldozer slips it can go down an embankment, or if it is working while the apron feeder is working the ground can fall under it. Obviously, we already have processes and technology in place to mitigate these risks, but placing operators in a station away from danger areas eliminates any potential risk of them being injured, no matter how small. .

She says remote operators must always be “close to the action” and have detailed knowledge of the site to operate most effectively and efficiently. “Even though a ‘no line of sight’ operation seems like it could be done from anywhere, the reality is that these operators are multitasking in their roles,” she says.

“It will depend on the state of the coarse ore stockpile and what is coming in and going out. They must be able to visually inspect and determine what needs to be done. They may spend an hour or two dozing, then move on to other tasks while they wait for supplies to be replenished.

“When you need bulldozer operators, you usually need everyone on deck, and when you don’t need them, if they’re sitting in a control center hundreds of miles away, they is much more difficult to stay on top of other tasks that they might perform on site.

Woolcock and Webster admit there was some resistance among the first operators to be trained in TDS, but as they became more familiar with the solution, operators adopted it.

“A lot of operators literally work the dozers through their seats,” says Webster. “They may have worked for decades and are used to feeling the movement. So they have to relearn how to drive the bulldozer without that feeling of movement, and they rely entirely on the visual flow of information rather than the other senses of being in the moving platform.

According to Woolcock, the key to operator acceptance has been giving them time to use the system and understand the difference the advanced technology will make.

“With the on-the-job trainers (OJTs), they were initially excited to have the chance to learn something new,” says Woolcock.

“Once the training started, many of them got discouraged because as experienced bulldozer operators, they felt they were going to relearn all the knowledge they had accumulated over the years. years of manual use. So they felt like they were starting the first day of school all over again.

“But it was mostly about going through the classic stages of learning until they got a feel for it and got to that level of conscious competence.

“The transition from resisting acceptance to promoting the new way of working has been amazing and I think it’s because OJTs realized they were pioneering the new technology.”

Woolcock says two or three operators from each of Cape Lambert’s work crews will eventually be trained in TDS operations, while the technology is gradually rolled out to other Rio Tinto sites.

For WestTrac Technology Managing Director Alister MacPherson, the phased rollout required a series of adjustments within the mining technology team and deployment methodologies. With multiple deployments, WestTrac aims to identify repeatable parts of the process and ensure adequate resources to fulfill relevant roles and responsibilities.

“We want to roll this out as much as possible as a program of work rather than a series of individual projects,” says MacPherson.

“That means first making sure we’ve had the right training in areas such as product management, project engineering and technical support, and then developing a collaborative approach between WestTrac and Rio Tinto to ensure the right course of the program.”

WestTrac Product Manager – Mining Technology, Gary Scott, says the Cape Lambert project has provided an ideal testing ground to develop deployment strategies that can be scaled up to other sites.

“Each site and situation will obviously have unique aspects, but there is a basic set of requirements that will apply to all implementations,” Scott said.

“It starts with an audit of the machines available to understand the current capabilities, and then we can specify the technology requirements to match those machines.

“In an operation like Rio Tinto’s, we generally expect to see good consistency, but there can always be differences depending on the age of the site and the maintenance and replacement schedules for assets.

“Then, when we know what needs to be done, we can proceed with the installation of the various control modules, the remote cockpit and ensure that the hardware and software communicate. It’s fairly straightforward as far as system implementations go, but the complexities come with the details of configuration and constraint handling.

“The system easily interacts with other Cat control systems, including MineStar Terrain, allowing us to configure work parameters including geolocation and avoidance zones. Essentially, these things are the same whether a bulldozer is controlled from the cab or from a remote control station.

These operating parameters and control solutions will be essential as TDS technology is deployed at Rio Tinto mine sites, including its new Gudai-Darri mine. When production begins this year, the site will be one of the most technologically advanced mines in the world and will include a large fleet of self-driving haul trucks, water carts and drilling rigs. In such environments, any manually operated equipment, whether in-cab or remotely operated, must be equipped to interact with autonomous machinery.

While every aspect of TDS technology and how it interacts with other equipment is safety-focused, Webster expects that over time, operations will also see productivity gains.

“There’s still a lot to understand about how we can be most productive with this system,” he says.

“Initially we’re probably going to be counter-productive compared to in-cab use, but as we learn and grow, and everyone becomes familiar with the new way of operating, the comfort and increased control will lead operators to be even more productive than we are today.