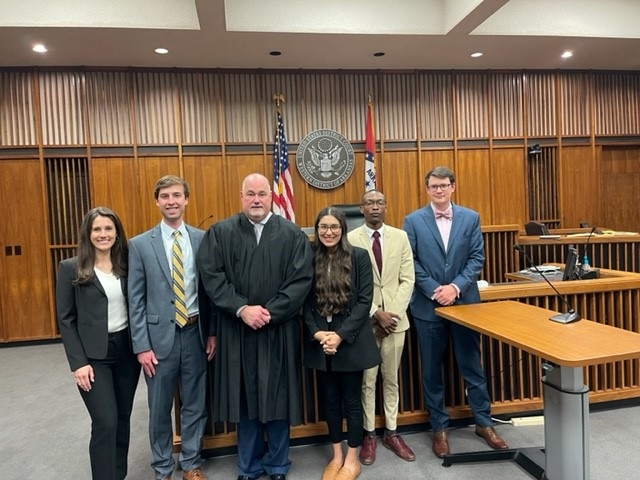 Law students Taylor Spillers and Bennett Waddell successfully persuaded the jury to return a verdict in favor of the defendant, winning the Grand Championship round of the U of A School of Law moot court. The deputy. Timothy Brooks of the United States District Court for the Western District of Arkansas presided over the final round, which took place April 12 at the federal courthouse.

The jury of fellow trial defenders and peers named Spillers and Waddell as the top team attorneys and Trenton Freeman as the top individual attorney overall. Freeman, along with Rebekah Marrufo and Pierce Teeuwen, represented the plaintiff.

The grand championship round is the culmination of the law school advocacy course. The file on which the students worked this semester was Sharon Watson vs. Century Technologies, Inc. The plaintiff, Sharon Watson, had been employed by the defendant, Century Technologies, for 25 years. Watson was 48 when she was fired. The plaintiff argued that she was discriminated against because of her age, while the defendant argued that the plaintiff was fired for her bad attitude towards the new management of the company, her decline in sales and her insubordination.

The two highest-scoring teams faced off in the previous eight regular tryout rounds that all 33 students in the class competed in.

“The students in this semester’s advocacy course were some of the best ever,” Brooks said. “Our students learned and demonstrated trial skills at a very high level of proficiency. Scoring the regular round was the closest we’ve ever seen. The future of advocacy in the courtrooms in Arkansas (and beyond) is very bright.”

Trial is an exposition of the four main skills of trial – opening statement, direct examination, cross-examination, and closing argument – ​​that students learn throughout the semester.

About the School of Law: The law school offers a competitive JD as well as an advanced LL.M. curriculum, which are taught by nationally recognized faculty. The school offers unique opportunities for students to participate in pro bono work, internships, live client clinics, competitions, and food and agriculture initiatives. The school strives to identify, discuss and challenge issues of race, color, ethnicity and the impact they have on students, faculty and staff members with the aim to create a diverse, inclusive and equitable community. From admitting the six pioneers who were the first African-American students to attend law school in the South without a court order to graduating governors, judges, prosecutors and professors who became President of the United States and Secretary of State, Law The school has a rich history and culture. Follow us on @uarklaw.