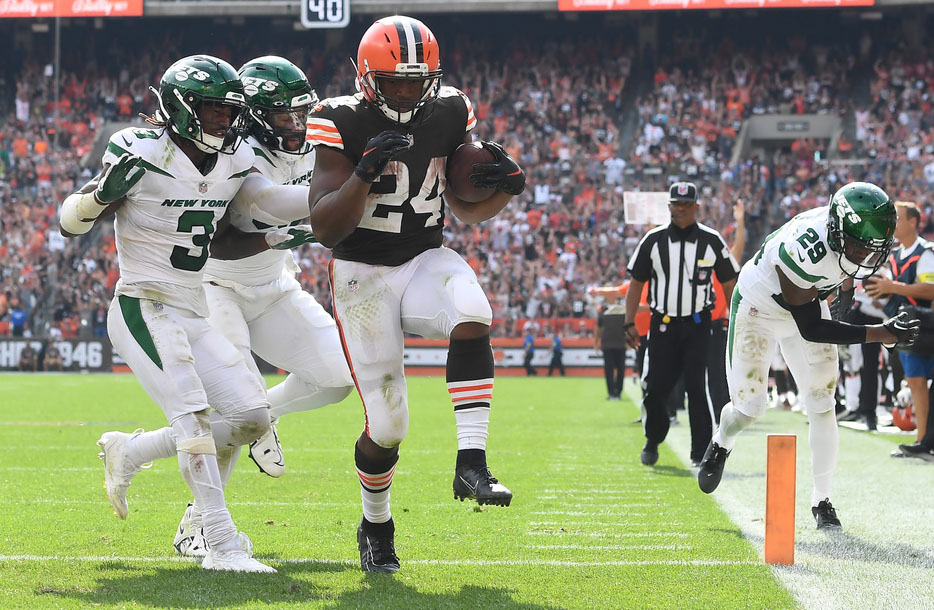 Monday night in Buffalo, after Titans quarterback Ryan Tannehill completed a 19-yard pass to tight end Austin Hooper, ESPN analyst Dan Orlovsky spoke for all of us when he said:

“Watch for the expanded version. Looks like a racing game outside the zone. Go to your depth and there is this three level flood. You go to the post on the outside, the ball fakes in the back.

Yeah, he pulled the words straight out of my mouth, or some other orifice.

And that, naturally, brings us to World War I and the deadly stalemates of trench warfare. The British infantry were not only shattered, but also suffered from a myriad of unidentified crippling bowel diseases.

Doctors on the ground, before evacuating the victims to field hospitals, marked them with the notation “GOK”, which stood for “God only knows”.

Last weekend was another busy one for GOK – games won and lost for no apparent reason on top of rotten decisions and behavior.

Let’s start Friday night with the Yankees-Brewers game. The Yankees were down 7-6 in a game that lasted 4:09, with the teams using 15 pitchers as both analytical managers, Aaron Boone and Craig Counsell, pulled out effective pitchers in search of one to bomb.

It wasn’t enough that Lou Trivino, in the seventh, faced three batters, striking out all three. Boone likes to try to improve on perfection. So Trivino is out.

Why was baseball lost in such madness? OK.

On Saturday, with blowouts all over TV, ESPN2 had a close one, Purdue-Syracuse. With less than two minutes left, Syracuse led, 25-22, but Purdue led. Why Orange manager Dino Babers didn’t use any of his timeouts seemed odd. And so, with 51 seconds remaining, when Purdue tight end Payne Durham caught a touchdown pass, it seemed even more unfathomable.

Durham should have been flagged for performing an excessively lewd and slicking end zone strut. Repugnant. But he quickly paid off.

After the extra run, Durham was flagged for a late hit. A moment later, a Purdue coach, apparently furious at the call, was also flagged for unsportsmanlike conduct. With a short gift wrap on the court, Syracuse returned the kickoff at 50, with 45 seconds remaining.

Two more penalties against Purdue brought the Orange closer until they scored with seven seconds left. Another unsportsmanlike flag against Purdue followed.

The final minutes of the match included the latest in sports group participation: vulgar chants inspired by a mob mentality.

Still, ESPN’s Brian Custer (former SNY anchor who didn’t quite get it) and Dustin Fox couldn’t get over the “fact” that we just watched a “great college football game!” when it was a fool’s delight.

The capper came in the postgame “interview” with Babers conducted by Lauren Sisler. With so many good things to ask, she relied on this universal “question” that post-game Inquisitors memorize all week:

“What kind of statement is that for your football team?” Ugh!

The next day, more: Browns running back Nick Chubb and the 24 Cleveland coaches simultaneously won the Fantasy Football Play of the Week and lost the game when Chubb chose to run for a TD rather than fall after hitting a first down with 1:55 remaining. The Jets had no more time outs, so game over.

Piss off a view of a historic moment

It has to happen, right? So here’s the plan:

One of the local television stations is expected to place a news crew outside a Yankee Stadium men’s room in anticipation of someone inside missing Aaron Judge’s next home run.

Chances are that after this home run, a grumpy young father will emerge with his child who couldn’t hold himself back.

What an angle! What an interview! What a scoop!

On ESPN’s “Around The Horn” on Wednesday, panelist Frank Isola noted that the excitement attached to Judge’s homerun season had been diminished by the steroid-era “achievements” of Barry Bonds, Mark McGwire and Sammy Sosa – a veil cast over the negligence backline of barren former commissioner Bud Selig.

Agreed. Although Bonds, McGwire and Sosa were not elected to the Hall of Fame, Selig was inducted just two years after his retirement.

The NBC team of Jac Collinsworth and Jason Garrett who called the Cal-Notre Dame game on Saturday should try some plain English. Games were not called, they were “composed”. Quarterbacks weren’t running, they were “using their legs.” The running backs ran ‘downhill’. Both offenses attempted to create “positive plays”.

Incidentally, a reader asks if players can still run downhill after teams switch sides on the pitch. Answer: Yes, but only if the game is played at the North Pole.

SNY’s Steve Gelbs, short of hole 2 in Milwaukee as a Polish sausage, won the sausage race on Wednesday, proving that hams are eligible to run as sausages.

All the stats at all times: At Panthers-Giants halftime last Sunday, Fox released a full-screen graphic showing the three “Top Performers” in the game. One was Carolina wide receiver Robbie Anderson: ” 3 catches, 32 yards.” Not a lot. And a hold ended in a fumble that led the Giants to a 3-0 lead.

On Wednesday in Milwaukee, Jeff McNeil of the Mets injured his hand trying to make a catch against the left field fence in front of a billboard, “Injury Lawyers.”

During Mets games, we now regularly hear Keith Hernandez moan, moan and moan when something cataclysmic hits the Mets, like a single bloop.

Still, who can’t sympathize with Hernandez when a slow game (aren’t they all?) delays his return to Sag Harbor to sip wonderful wines? Cry me a river from Château Pape Clément Pessac-Léognan cabernet 2016.

Yankees TV shows, if you can watch them, continue to be insulting. Less is less Aaron Boone Baseball, followed by a pass or excusing the inexcusable with excuses morons wouldn’t buy.

On Tuesday at 4-4 against the Pirates in the seventh inning, the indolent Josh Donaldson, with a runner in the front row, pinned down shortstop Oneil Cruz, a fly ball likely in double play. missed, so no second game, but he sent Donaldson off. YES then showed Donaldson. at the start, not particularly in a hurry, even carrying his bat towards the first.

David Cone: “It’s hard to fight that initial disappointment when you don’t make contact. Carry the bat with you a few steps.

“And we see it so much in today’s game. It’s not that players today are dogs. It’s just that they expect to have a hit. And when they don’t, they’re disappointed, and sometimes a full step or not missing the box can cost you dearly.

Eh? Donaldson made good contact. And when batters averaged .260 instead of .240, they didn’t expect to “get a hit”?

It was 4-4, bottom of the seventh, man first, no out! Habit? Disappointment? Stop! Donaldson insisted. Still. If it’s a “habit”, Boone, the last five seasons, has nurtured it.