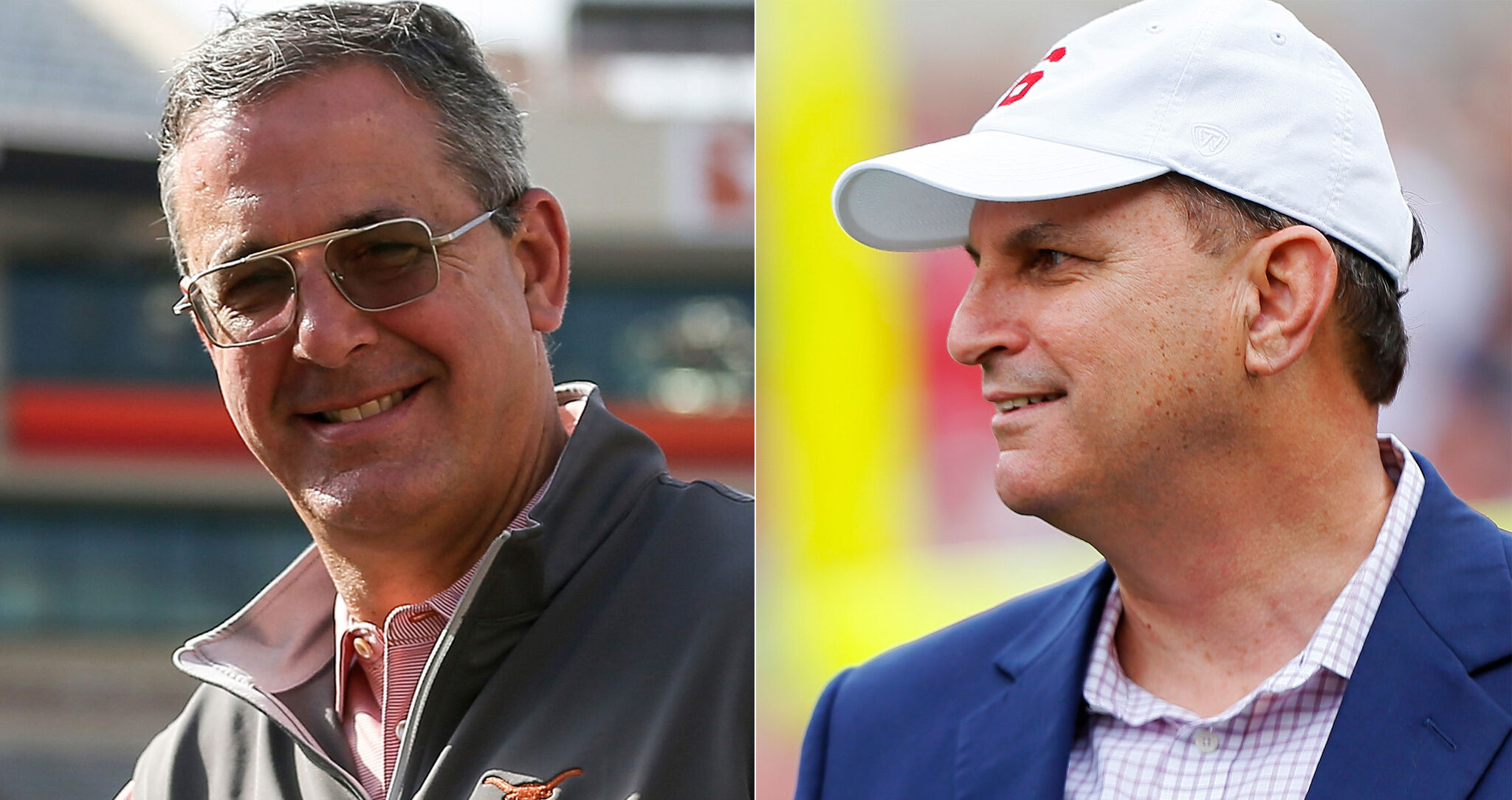 Texas and Oklahoma committed to Big 12 AD – for now

SAN ANTONIO — They sat a chair apart, not because they’re the athletic directors of two of college football’s biggest brands and passionate rivals, but “because we’re Italians.” “.

“As you already guessed, we’re both Italian, so when the hands start to play we need to have space so we don’t knock each other out,” Castiglione said.

Nearly a year later, UT and OU’s explosive decision to leave the Big 12 for the Southeastern Conference is still being felt in the conference’s latest realignment cycle.

After an hour-long roundtable at the Texas High School Coaches Association convention, Del Conte and Castiglione gave no indication of a timeline for leaving the Big 12, except to say both schools are committed to staying. in the league until 2025.

“We realize we’ve made a decision and we’re focused on being a great member the whole time we said we would,” Castiglione said. “There is a lot of change around us. If it facilitates a conversation that needs to take place about leaving early, then it is.

“But I’ve said that very regularly, and I know my counterpart Chris Del Conte has said the same thing, as have our presidents, that we informed the Big 12 that we would be leaving after 25, but we plan to fulfill our obligations. … And if they want to talk to us about something different, we will certainly listen to them.

“We will honor our commitments,” he said. “So where we are, I think these things are all premature. I mean, we’re 45 days from the start of the season. We are really focused on the football season this year.

Incoming Big 12 commissioner Brett Yormark said at the league’s kick-off event in Arlington last week that “everything is on the table” and that conversations with UT and OU will be forthcoming when he begins. officially work on August 1st.

The two schools are expected to owe at least $80 million in exit fees if they leave before the current media rights agreement expires.

“In any situation like this, I always look for a win-win scenario,” Yormark said. “That being said, it is important that whatever happens is in the best interest of this conference. But I look forward, at the right time, to having these conversations.

Del Conte and Castiglione have yet to meet Yormark in person, but have spoken to him on video conference calls with the other Big 12 athletic directors. Additionally, both ADs have attended league meetings in Scottsdale, Arizona, and at Irving for the past few months.

“We are friends with each of these ADs,” Del Conte said. “We have conversations. Obviously, when the discussions have taken place, they are difficult discussions, but I think everyone understands where we are coming from. And every conversation was an open dialogue. And I love every one of those ads. I love the members and I love what they represent.

“It’s not for me to decide, it’s about the relationship between Oklahoma and Texas and the Big 12,” Sankey told reporters in Atlanta.

In San Antonio, Del Conte and Castiglione participated in a session titled: “How to Lead in Uncertain Times.” The topic was appropriate given the volatility of the conference realignment since last summer’s surprise announcement that sparked a wave of movement that sent the University of Houston, University of Central Florida, Cincinnati and BYU to the Big 12 and UCLA and Southern California from the Pac-12. at the Big Ten.

Castiglione said changes to the university landscape have been “on the horizon” for some time.

“We have been watching these changes evolve for several years. Many years,” Castiglione said. “And we just felt like there were going to be massive changes and we had to think about what was best for our individual institutions. Now, a year later, there’s been a lot (it’s evolved). So some of that is, in a sense, consistent with what we’ve seen on the horizon. We’ll see. We’re still in the middle of the process. We want to do what’s right where our feet are planted. And , right now our feet are planted in the Big 12.”

Castiglione added that OU’s decision to leave the Big 12 was nothing personal.

“We had to see the world, look around the corner or at the horizon, or whatever you want to say,” he said. “It was important for us to think like this. It was in no way a sign of action or against anyone else. We are charged with running our institutions and must do what we think is right, what we think is ethical, and what will serve our people in the long run.