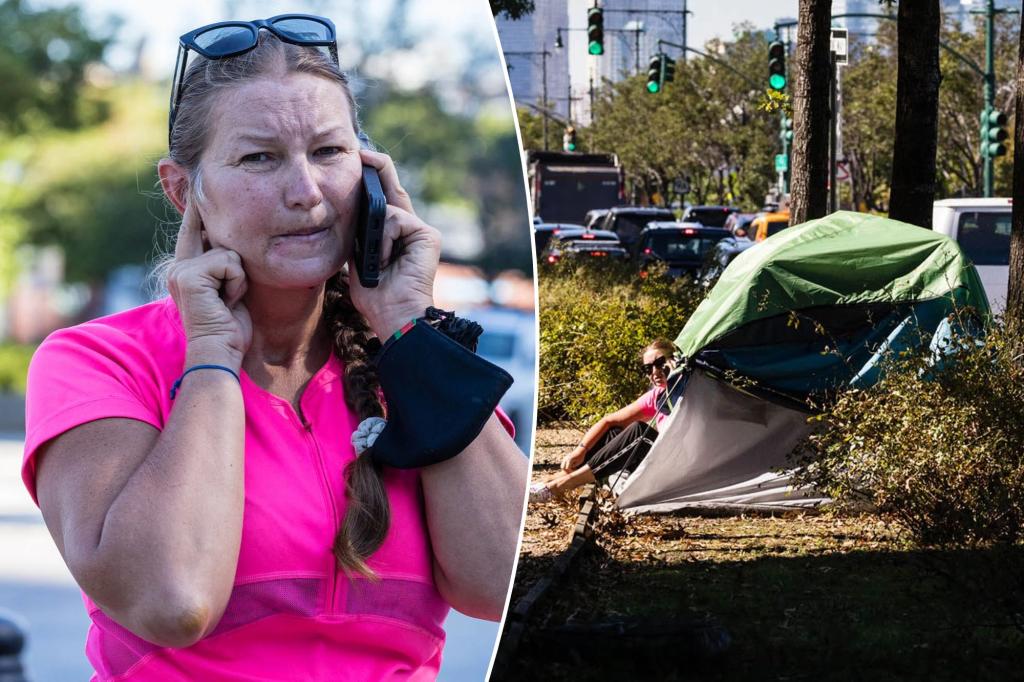 She’s not a happy camper.

A middle-aged Eastern European woman who said she couldn’t find a place in the city’s crowded and gruesome shelter system has pitched a tent on the West Side freeway median , near 12th Avenue and West 41st Street.

“The shelter is not good for me and it’s full,” she told the Post.

The outdoor woman then shouted at the reporter in broken English and threatened to call the police.

“I get the Supreme Court!” she threatened.

Twitter already has a field day with the highway encampment.

Others see it as a very bad omen.

“You tolerate one and you will have hundreds. This needs to be removed immediately,” one person commented.

Residents say tenting and roaming along the highway started early in the pandemic and increased last summer — and the city isn’t doing anything about it.

“I call it Whac-A-Mole because you see these tents go up, they get cleaned out and then they come right back,” said Jason Anderson, who posted a snapshot of the last inhabitant of the highway on Twitter. “It highlights a lack of law enforcement and the resulting urban disorder. This is one of many roadblocks preventing the city from getting back to normal and feeling like 2019 again.”

Katie Hamill said Hell’s Kitchen has become such an epicenter of drugs, vagrancy and mental illness that this “woman is probably there because she feels safer sandwiched between six lanes of cars than in the street where she can be attacked by homeless and mentally ill men”. .”

The urban motorhome has plenty of neighbors on the pier and in nearby Riverside Park South.

On Friday, The Post saw a homeless man return to his makeshift abode of painter’s tarps held together with duct tape. Another man was lying in a leather office chair. A third stood along the riverside walkway, hunched over his shopping cart for nearly an hour.

The city’s homeless services department identified about 3,400 homeless people on January 27, but advocacy groups like the Coalition for the Homeless believe that’s a significant undercount .