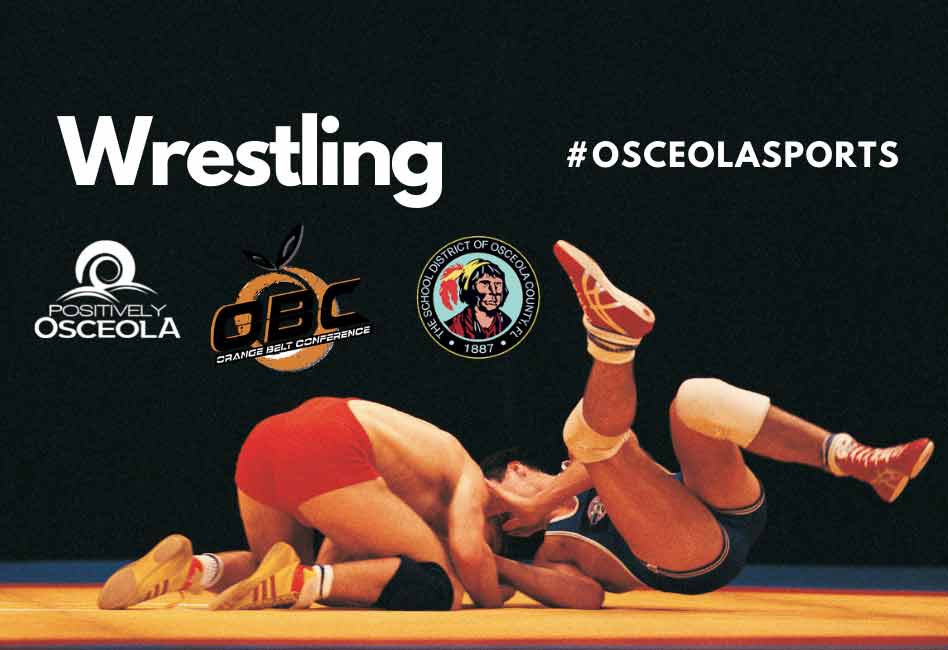 As the winter sports season draws to a close, wrestling takes center stage this week with regional tournaments being held across the state. Regionals are the final stop before the individual state championship tournament, which is scheduled for Kissimmee Heritage Park March 3-5.

In basketball, the Osceola Kowboys stay alive in the state tournament. Steve Mason’s side qualified for the regional semi-finals with victory over Ft. Pierce Central and will now face Wellington on Tuesday night at home, with the winner advancing to the regional final.

Here is an overview of sports in the county:

Most county teams will begin their season this week with Tuesday’s opener with East Ridge at Osceola, Celebration at Poinciana, Cypress Creek at St. Cloud and Liberty at Gateway. Thursday will be Tohopekaliga’s opener as they host Evans. Harmony got off to a good start last week, beating Gateway in their opener, 11-0.

The Kowboys continued their season last week, improving to 19-5 with a 67-51 win over Ft. Pierce Central in the Class 7A, Region 3 quarterfinals. Sean and Chris Combs combined for 40 points in the game, including a record 23 from Sean. Cory Vega added 10 as the Kowboys used a big 28-point fourth quarter to put the game away. Osceola will face Wellington (22-6), a team that beat the Kowboys by a score of 77-33 earlier this year. Osceola played in this game without three starters. Tipoff is 7 p.m. at the Osceola Gymnasium.

Gateway (18-9) saw its season end in a 63-50 loss to a talented Jones side in a Class 5A, Region 2 quarter-final game; while City of Life Christian Academy (20-8) lost in the same round of the Class 2A tournament.

The season ended for all Osceola County teams as Gateway and St. Cloud lost in their respective regional finals. Gateway suffered a heartbreaking 37-35 loss to Bishop Moore in the Class 5A, Region 2 Finals as they fell just three points short of a trip to the Final Four.

Bishop Moore’s Alyssa Brasko grabbed an offensive rebound and hit the game-winning bucket with just 14 seconds left. “If you had told me before the game that we were going to keep Bishop Moore at 37 points, I would have gladly taken it, unfortunately that turned out to be insufficient,” coach Justin Marino said of his team. who finished with a 22-8 record.

There was no such theatrics in St. Cloud’s game with perennial powerhouse Wekiva in the 6A, Region 2 Finals as the Bulldogs fell 52-32. Jada Eads led the way for Wekiva with 19 points as the Mustangs advance to their fourth consecutive Final Four appearance. “We came up against a very physical, fast and athletically gifted team. I was proud that we stayed with them for two and a half terms, but in the end, we just didn’t measure up. I’m proud that this team won 20 games, a district title and had a good run in regionals,” said coach Chad Ansbaugh. St. Cloud, who started four sophomores for most of the season, finished with a 20-9 record.

District tournaments were held last week and Osceola County wrestlers did very well – advancing 57 wrestlers – including 24 district champions – to regional tournaments this week. In order to qualify for the state championship meet at Osceola Heritage Park March 3-5, wrestlers must finish in the top four this week.

Celebration advances 10 to regionals, including district champions Kaluv Peterson (132) and Chase McBroom (152); while Poinciana sends four, including 106 pounds. champ Landon Trigueros. All three schools will send their qualifiers to the Class 3A, Region 2 Championships at Osceola High School.

In the Class 3A, District 9 tournament in Harmony, the Longhorns dominated winning 10 of 14 weight classes and capturing the Tag Team Championship with 285 points. Tohopekaliga (132.5) finished fourth.

Tohopekaliga will send eight to next week’s regional, including runners-up Jacob Noid (170) and Jayson Ortiz (132). All three schools will participate in the Class 3A, Region 3 meet in Harmony.

St. Cloud hosted the Class 2A, District 8 tournament on Thursday, finishing fourth in the Tag Team Championship with 119 points. Gateway finished third (156.5) and Liberty (50) placed 6and in the eight-team event.

“Given we only had eight wrestlers in the 14 classes, I was very happy with how our team performed,” Bulldogs coach Mike Short said of his team advancing six wrestlers to regionals. , including Tyler Bullard – the champion at 132.

Gateway will send 10 wrestlers to regionals, including 106-year-old district champion Talyn Fisk; while Liberty saw its only two entrants advance and win district titles as Daniel King (30-4) won the 220-pound. title and Brainys Robles (39-1) won the 285-lb. to classify.

Forwards from St. Cloud, Gateway and Liberty will compete in the 2A-Region 2 meet at Lakeland’s Lake Gibson High.

A total of 32 teams, including six from Osceola County, participated in the Class 1A, Region 2 tournament in Kissimmee last Friday. Freedom High School ran away with the tag team title, scoring 241 points – advancing 10 girls including four regional champions to the state meet. Gateway finished fourth with 84 points; followed by Osceola (64-6and), Poinciana (45-9and), Celebration (29 – 14and), Tohopekaliga (27-16and) and Harmony (10-28and).

In total, Osceola County will send 11 girls to the historic first-ever FHSAA Girls’ Wrestling Championship, which will be held in conjunction with the Boys’ Tournament at Heritage Park March 3-5.

Most county teams open their seasons this week, including Poinciana at Celebration Monday; Lyman at Osceola and Liberty at Bartow on Tuesday; St. Cloud hosts Timber Creek on Wednesday and Tohopekaliga opens with a home game with Celebration on Thursday. Harmony got off to an early start and won with a 5-2 win over Lake Nona last week; while Gateway lost a 16-0 decision to Heritage.