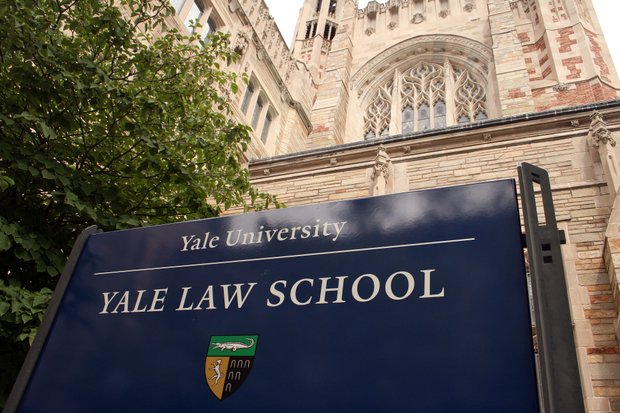 Any discussion of the fallout from the Yale Law School protest must begin with an appropriate context: the Federalist Society chapter invited a speaker from an SPLC-recognized hate group and when an overwhelming number of students expressed their disgust at the decision, the school blamed the protesters. Freedom of speech is not a bailout for people who go bust in the marketplace of ideas, just a guarantee that they stand a chance of winning whatever applause or derision they generate.

But apparently Yale Law School is less concerned with lending its credibility and goodwill to speakers hostile to the very humanity of some of its students, and more concerned with student expression. After all, “speaking” is for the people on stage, not for the little people in the audience!

Bringing us to the latest gob-smacking development in this matter. Excerpt from the Yale Daily News:

Law professor Kate Stith, who moderated the March 10 panel that was disrupted by student protesters, sent the titular law school a scathing memorandum on Thursday claiming that students violated the University’s free speech policy. Yale and should be educated and potentially sanctioned.

The professor’s note is particularly interesting since everyone — including other critics of the protest — agrees that the students complied with Yale’s stated free speech policy. The school has a “three-warning protocol” whereby protesters who disrupt an event receive three warnings before punishment. All parties agree that ONE warning was issued and at that time the protesters left the event.

The person who issued that one warning? Professor Kate Stith. So the person who could took actions that would have put the students in violation of Yale’s free speech policy but didn’t now howls that the students violated the free speech policy. How could she even suggest penalties when she knows she has not issued the second or third warning as required by the plain language of the existing rules?

“As a former prosecutor, I am well aware that not all violations should be grounds for punishment,” Stith wrote.

There are many questions asked about “being a former prosecutor” which the professor has already answered “as a former prosecutor”. Strict compliance with the protocol should not preclude possible punitive action! Seriously, it’s quite a lesson in instilling respect for the rule of law in an umpire to decide to waive strikes two and three just to advance the inning.

“In my view, we should use this moment as an opportunity to educate our students on the fundamental importance of free expression to our academic mission – and to make it clear, as Dean Gerken forcefully wrote, that it cannot never happen again.”

What probably shouldn’t happen again is this whole thing about “lending Yale’s reputation to normalizing human rights abuse.” As one student eloquently put it in this article:

“The First Amendment is complicated, and it protects both sides of an argument,” AJ Hudson LAW ’23 said in an interview early last week. “But it seems like it’s only ever been used as a tool to tell students of color, gay students, or female students to shut up.”

This is certainly the view of Yale Law School. Both parties have a right to speak up, no matter how much one wants to take it away from the other half of the equation. That’s what makes it all so pernicious: The rhetoric coming from anti-protest corners isn’t about imposing balanced “time, place, manner” restrictions to ensure expression is also respected – it’s a full-throated rejection that protesters have every right to talk about at all.

Every denunciation of this Yale protest centers on the entirely fabricated requirement that students sit quietly and listen to whatever nonsense a school chooses to bless. Under the guise of lofty language about the “university mission,” critics deflect discussion from the questionable but reasonable position that protests should manifest as, say, a picket line outside the building, to conclude that expressing disagreement with a law school guest is in itself a morally unacceptable and even punishable offence.

It’s more than semantics. A thorough discussion can take place on the balance between the rights of protesting students to be effectively heard and the right of a school to hold an orderly event. We can disagree about where to draw that line while recognizing that a certain line can exist. Still, that’s not the discussion the school (and its cheerleaders in the media) are whipping up.

Unfortunately, this incident feels like a canary in a moment of mine. The coming years will likely see more aggressive efforts to turn “free speech” into a stick to silence dissent and enshrine a new right to be indoctrinated without interruption. Talk to non-lawyers and you already hear people willing to argue that Twitter banning Donald Trump is an attack on free speech as opposed to free enterprise using its platform as it sees fit. It is a spectacular failure on the part of lawyers to educate the public about what free speech does and does not entail.

Allowing these “free speech” narratives to evolve into an active demonization of protest in all its forms is another step in this dangerous civic miseducation.

And the country’s pre-eminent law school appears to be doing its part to further that damage.

Joe Patrice is an editor at Above the Law and co-host of Thinking Like A Lawyer. Feel free to email tips, questions or comments. Follow him on Twitter if you’re interested in law, politics, and a healthy dose of college sports news. Joe is also Managing Director at RPN Executive Search.