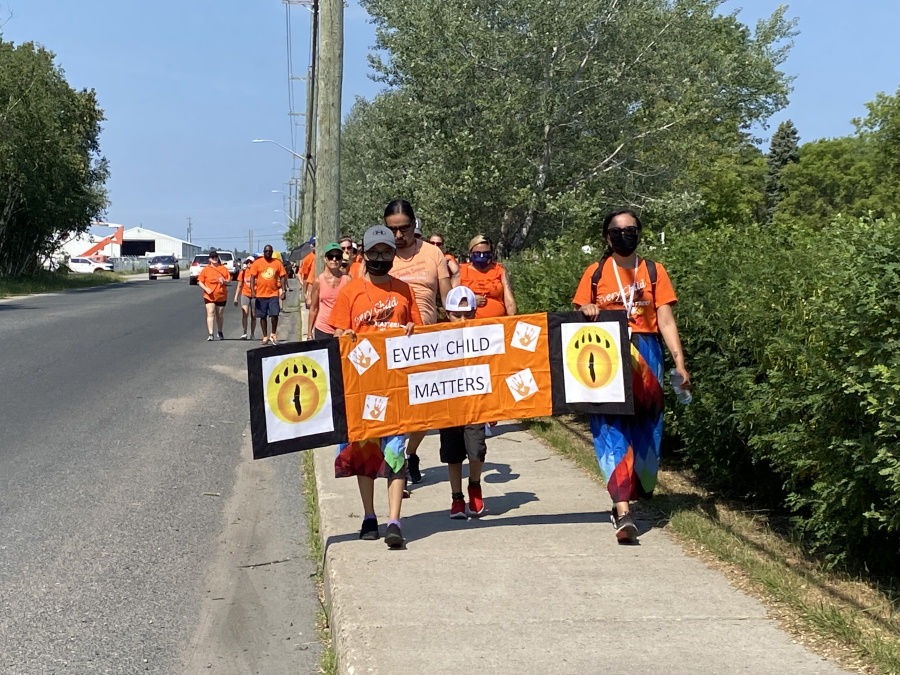 Below is a collection of some of the most clicked stories on KenoraOnline and DrydenNow as of July 2021.

Over 100 people gathered in Kenora to pay tribute to the lives lost in residential schools and the survivors. The group started the morning under the Whitecap Lodge in Kenora and walked to the Cecilia Jeffrey Residential School site on Airport Road … Read More.

This is the moment Gabe Mastromatteo and Northwestern Ontario have been waiting for since joining the Canadian Olympic swim team last month. Mastromatteo is set to hit the water tomorrow and start his Olympic round tomorrow morning at 6:25 am CDT competing in the men’s 100m breaststroke as an individual. Mastromatteo will be in the third round and is assigned to lane 3 … Read More.

Gabe Mastromatteo of Kenora is on his way to the medal round in the men’s 4x100m medley relay. Gabe and his team finished 8th overall in their last swimming event at the Tokyo 2020 Olympic Games with a time of 3:32:37 … Read More.

A Deer Lake First Nation evacuee who was evacuated to Dryden on their way to Thunder Bay publicly accused the Comfort Inn Dryden of increasing their room rates as a result of the evacuation. Read more.

The Lake of the Woods Control Board (LWCB) says this has been the driest year for the Lake of the Woods sub-basin since 1961, according to its records. According to Environment Canada’s historical records, between January 1, 2021 and June 30, 2021, 152.8 mm of precipitation fell in the Kenora area … Read more.

Numerous large forest fires in Northwestern Ontario have rolled smoke across Kenora today causing low visibility and intense smoke odors throughout. Kenora Fire confirmed today that the smoke is not from fires near Kenora. The smoke was blown out by the forest fires at Red Lake 61, 15, 77 and Kenora 51. Read more.

High temperatures, little precipitation and numerous thunderstorms have caused numerous large forest fires in northwestern Ontario. The extreme fire risk and the increase in forest fires prompted the ministry to issue an emergency zones order in northwestern Ontario. This decree has the effect of allowing the ministry to take special measures to ensure the safety of persons and the protection of essential goods … Read more.

Kenora Ontario Provincial Police are investigating a suspicious death on Mikado Avenue in Kenora. The OPP said at around 3 p.m. on Friday, July 30, officers were called to a residence on Mikado Avenue where a deceased person was found … Read More.

Dr. Steven Viherjoki of Dryden was recognized for his hard work and dedication to the community by being this year’s recipient of the Society of Rural Physicians of Canada (CRPS) Rural Service Award … Read More.

About 20 Australian wildland firefighters will travel to northwestern Ontario to help fight several large wildfires in the region. “Australian wildfire staff have arrived in Ontario and will begin supporting Ontario with an Incident Management Team, which is a group of specialists who manage and attend to a wildfire,” said Johnathan Scott, Ministry of Natural Resources and Forestry Fire Information Officer … Read more.

Last night, the mayor and council cut the ribbon for the city’s first off-leash dog park behind the A&W ball fields. This new addition in Kenora comes from the need for dog owners to have an off-leash park. in the city … Read more.

Last Friday, the Independent Wabaseemong First Nation hosted a groundbreaking ceremony in their community for their Green Living for Tiny Homes project. The ceremony was to officially start the construction of the first of the 6 small houses. During the ceremony, community elders blessed the area by placing tobacco in the ground alongside Wabaseemong leader Waylon Scott and entrepreneur Mike Neniska and songs were also performed. A minute of silence was observed in memory of mass graves discovered in residential schools across Canada … Read More.